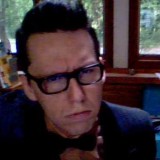 Mr Josh Latta was born in 1853 to a family of tamed Pleistocenes. he was raised as a small child, entering into adulthood on the eve of his 7th birthday as was the tradition of the day. in 1867 he undertook a course in multi-reptile wrestling ending his career as 'croc-tussler' after an unfortunate shallow-river related accident cut short the life of a young crocodile. moving to rural Sheboigan in the fall of 1872, he made a good living raising fancy roosters and painting murals across the town depicting the various lascivious secrets of the townsfolk. driven out of town in the spring of 1873 he found his way to Utah where he was Flaneur in Residence at the Foundation of Gentlemen and Cultured Guinea Pigs (now the Foundation of Water Fowl and Cultured Guinea Pigs) until a scandal involving twin milkmaids and a churn of cream called for his resignation. Latta entered into the history books in 1899 for his lifesize construction of Monument Valley in matches.